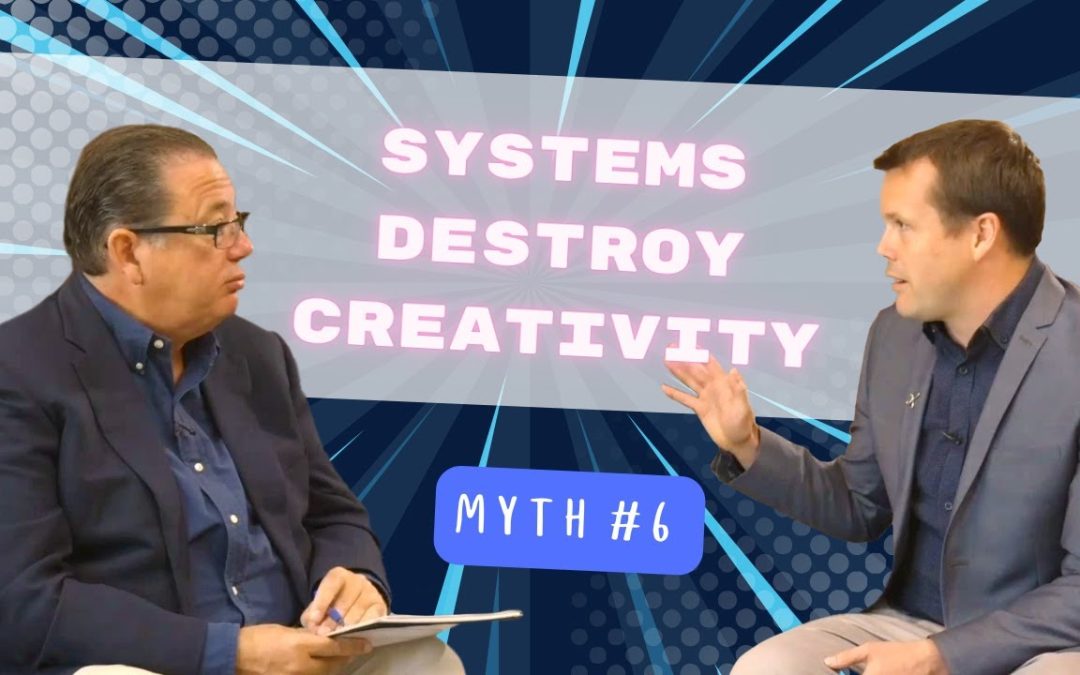 Did you know business systems actually improve your team’s creativity?

One of the main problems non-systemised businesses suffer from is inconsistent processes.

So when team members have their own process of handling tasks it becomes difficult for everyone to coordinate.

And when problems arise, your team spends too much time trying to solve these problems. Reducing opportunities to show their creative abilities.

However, business systemisation solves this problem.

This gives your team the freedom of time to focus on work.

With more time, your employees focus better on work and develop creative solutions for your customer’s problems.

The end result? Better products or services for your customers, and improved productivity.

00:26 – Systems increase creativity and take advantage of opportunities
00:59 – An example of opportunity systems create
01:18 – Could you seize an opportunity?
01:49 – A client example of systems and creativity
02:24 – How the team worked better with systems
02:00 – The counterintuitive nature of systems
03:04 – Systems give you freedom of time
03:45 – Little headaches become big problems without systems
04:06 – When you should systemise
04:45 – How systems will skyrocket your business

So myth number six is that when we systemize a business, we remove creativity. And I can understand people thinking that as well, because we think of creativity as a little bit random, a bit free flowing, a bit outside of the box, all that usual kind of stuff.

Why is that a myth?

It’s a big myth because when you install systems, you actually find that the reverse is true. It’s counterintuitive, but a systemized business increases creativity and the ability to take advantage of opportunities.

The problem is, a lot of business owners, when they’re stuck in it and things are very chaotic and they’re very busy. Even if the world’s greatest opportunity fell in their lap, they wouldn’t recognize it or couldn’t take advantage of it because they’ve just got too much on.

There’s no way that I could have gone to work full time on Michael Gerber’s business for three months unless we ran a systemized business. And I treated his business as though it was my business, and I did that for three months. And the only way I could take advantage of that, if you imagine if the Oprah of your industry came knocking on your door and said, I’ve got a project, I’d love to work together, most people just wouldn’t be able to take advantage of that opportunity.

What systemisation does is it creates space. Once you’ve got all of the basics handled, and you don’t have to worry about the recurring problems, you just know that it’s handled. It even allows team members extra creativity and space.

There was another client who went through the SYSTEMology process. His name was Michael, and he runs a company called Digital Thing.

Now, they build websites so they are very creative. And he had a little bit of hesitation at the start thinking that this is going to remove the creativity from what they do. But as he started to install a framework for his team to operate around, like how they set up projects, how they invoice, what are some of the email templates that they’re sending through to clients, and they started to get all of this in place.

He actually found his designers performed better because when they were on and in creative mode, they could create, they didn’t have to worry about stuff going on. So it’s completely opposite to what people think.

But it is counterintuitive because it does feel like having worked in creative spaces in my life, throughout a lot of periods of my life, you tend to think anything that you feel is stifling instead of freeing. And I think that’s, again, systemisation is about freeing up. And I remember reading a survey recently, we talked about what’s the one thing that most small business owners want. It actually wasn’t more money, it was actually freedom.

One is if you take a bird’s eye view looking down, it’s your current business, what does it look like and what’s good and what’s not? And then your future state, what do you really want your life and your business to look like? And then you would say, well, how do I get to that? And I think, again, we often think more money would do it or more customers would do it, more this and all that. From my experience, it’s rarely that stuff that fixes it.

Because if it’s fundamentally got issues, those issues just get bigger. Yeah, as you get bigger. So if you get little headaches now about growing a bigger business, you’ll get bigger headaches. If you can’t collect money because you’ve got bad systems in place when you’re little, you’re going to have big issues with collecting money when you turn over triple figures, you can still grow your business, but it’s a painful growth.

I find the sweet spot to start thinking about systemisation because I come across that all too often. I’ve worked with some very large companies with up to 40 and 50 employees and they still have operational problems that could very easily be changed with some good systems and processes.

However, once they’re at that size, it becomes harder and harder to change the culture. Because at that point, you’re kind of like you want them to do it this way, but it’s so ingrained the way that people are working there chaotic or that’s the way that we’ve always done things.

So the sweet spot is actually closer when you sort of in that range anywhere, I’d say from probably about three staff all the way up to maybe 12,14 staff somewhere around there. If you start getting the right foundations in place at that point, you’ll actually skyrocket through that next phase.