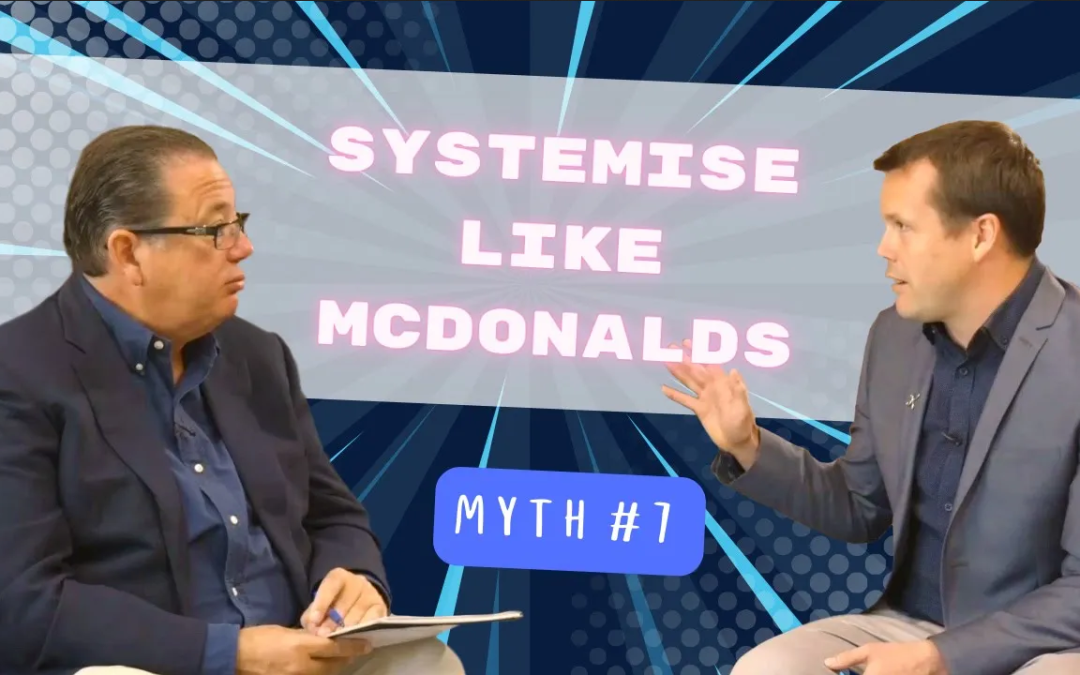 Do you know the reason why systemisation often fails?

Many business owners attempt to fully optimise their systems from the word go.

While optimization is your end goal it shouldn’t dictate your process.

Instead, use an approach that takes into consideration your business’s current needs. Not future needs.

And here’s why, if you focus too much on optimization, you’ll end up burdening other players in your business.

For example, if your goal is improving sales, premature optimization will largely focus on your sales team.

Limiting the time and resources spent systemizing your support teams like marketing and operations.

And the end result?

Watch this video to learn more on how to build systems that won’t overwhelm your business, click the link now.

You gotta systemize like McDonald’s. I know we’ve spoken about McDonald’s, but what does that mean?

It’s this search for perfection and it’s the business owner who oftentimes, because they’re a visual and a creative, oftentimes they can see what the end result looks like. You were just talking about it before, where there’s the business as it is running now, but then they think about the business, how they want it to operate, and it’s the bridging of the gap that a lot of business owners really struggle with because they see this over here as the perfection.

So they try and get it like this over here, which means they’re trying to make systems just right. And one thing that happens is they’re oftentimes looking at a very micro level in the business and they might go, oh, well, let’s work on our sales script because I want to increase conversion. But business is a collection of systems, and you can pull a lever at one point and it’ll have an impact.

So you actually want to get a baseline down. And then you need key metrics like a dashboard to have visibility of what’s going on in the business. And the key to get a baseline working is consistency. So you just get, without trying to make things perfect, capture what’s happening right now inside the business, and then at least try and get it consistently happening. Because with that consistency, then your numbers actually mean something.

I remember I was working with another company, Absolute Immigration, Jamie Lincoln, and we were doing some work together. And when we first started, he was going through the SYSTEMology process.

The way he came about this was that a few team members started going on holiday, so he got sucked back into the operations. And then he started to realise different team members were doing things in their own way. There was no consistency.

So I said to him, if there’s no consistency, your metrics, your numbers won’t really mean anything because you can’t make a change and then see that change across the board. So I said, let’s capture what’s happening, get a dashboard in place, and then we start to improve.

Now, if I come back to the example of sales, if people don’t get the complete visibility of a business, what they end up doing is they optimise to improve the conversion rate.

They might double their conversion rate, and they might do that by over-promising and making it incredibly difficult for your operations team to deliver. So if you were just looking at sales, yes, you might dramatically improve your conversion rate, but it’s going to make your operations team struggle, then the client might be happy. Yeah, that starts to rise and then that hurts your repeat business.

So if you weren’t looking at the metrics, just making small changes and trying to perfect little things without really giving respect to the business as a whole, you’ll come unstuck. So that’s why I leave the optimization in this SYSTEMology process.

Optimization is actually the final stage in the process. So don’t try and make it perfect to start with. Capture what you’re doing. Let’s get some consistency. You’ll even just get improvements by shining a light on the way things are getting done and then getting team members to all follow the same process. And that comes back to that idea we touched on before about McDonald’s.

You don’t start optimising or building a business like it’s a 60 year history. But if you watch the movie The Founder, you get inside into that. It started little with the concept of systems. It wasn’t just, you can’t do it, but we can learn from McDonald’s.