A Systemised Business is a Scalable Business 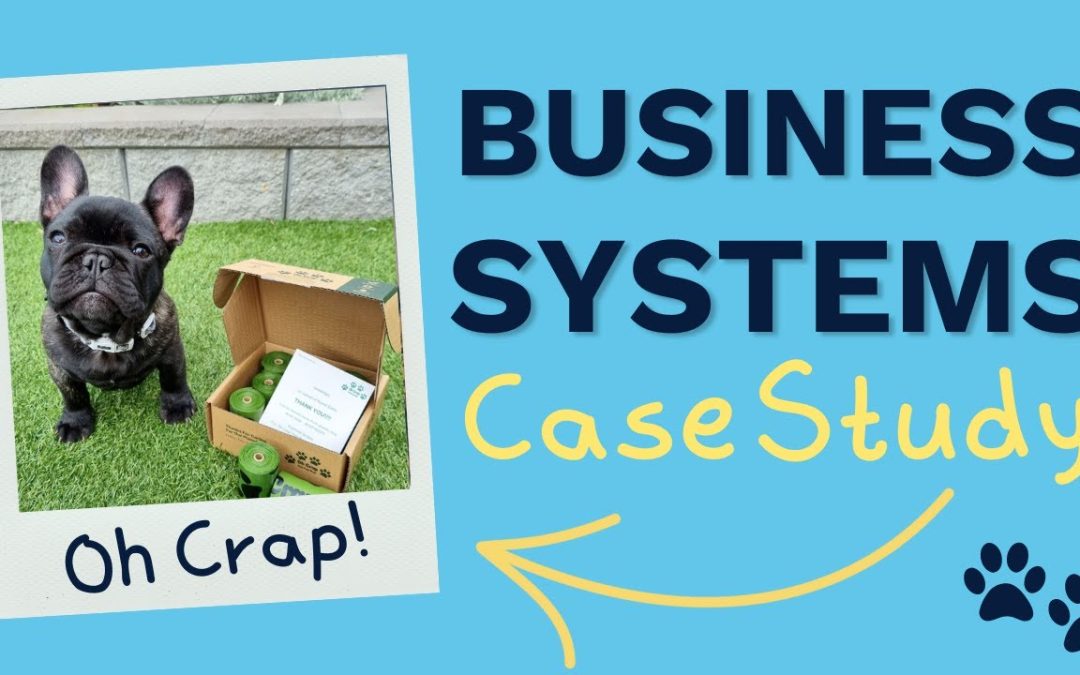 Most business owners are too caught up in the day-to-day operations to even notice if the opportunity of a lifetime fell into their lap. They’re too busy and, even if they did notice, they wouldn’t have the ability to capitalise on it.

The thing is, you never know when opportunities will come knocking so you must be ready. Start preparing now. Business systems hold the key and allow you to create time, reduce errors and scale your operations.

In this video, Dave Jenyns shares how Oh Crap founder – leveraged the power of systems to become an industry leader sell over 14 million dog poop bags.

I remember one of our clients, a company called Oh Crap, which is a fun name. They make compostable dog poop bags. They came up with this idea while out walking one day. The business owner, Bruce, saw people pick up dog poop and put it in a little bag, and then realising all of that just ends up in a landfill and never breaks down. And dog poop should break down. And here it is sitting in a plastic bag. So they came up with this idea of, well, let’s create bags that can be compostable.

And it started off in their garage. They came up with the idea, sourced a manufacturer out of China. It was a real humble beginning, like a home business. When the shipments would come from China, they’d be stacked pretty much from floor to ceiling, all of the bags in all of the different rooms around the house.

And initially, it was just Bruce, it was his brainchild, his business, and any time he wanted to go on holidays, the business would stop. And they figured out they were getting some ads working on Google AdWords, and they were getting good lead flow.

But every time that Bruce wanted to go away on holidays, they’d have to pause the ads. No work would happen, and everything would kind of grind to a halt. They’d stop fulfilling and all that sort of thing. So it wasn’t really a business. It was kind of just Bruce doing his hobby thing on the side. And then realised there’s a huge opportunity where they could continue to grow it.

Henry started to really dial in the marketing and they ended up hiring a VA out of the Philippines to become their systems champion and go through the SYSTEMology program.

Basically, Henry said to this VA in the Philippines, this is now your job. I want you to be the systems person. I want you to be meeting with team members, constantly reminding everybody to follow the processes. If I send you a recording, I want you to do the documentation. And here’s our system for creating systems. Here’s what a system should look like, here’s where they should be stored. And then they started integrating it with their project management platform.

What ended up happening is they opened up the capacity of the business, because initially, when Bruce goes away on holiday and things grind to a halt. If they got a huge opportunity or a huge order that would fall in their lap, they would just miss that opportunity. They weren’t ready for a big order. But as you start to systemise, you start to open up capacity and you start to create space for opportunity.

So what ended up happening is the RSPCA came across the work that they were doing and they said this is awesome, we would love to endorse your bag and get it listed on our sites and push it all through to our locations. And then their first order.

They ordered like a million bags and Bruce and Henry were both like if we hadn’t systemised and got the business ready to be able to handle that capacity. If the RSPCA had knocked on our door twelve months earlier we wouldn’t have been able to service them because the lead times were too long and all of the different challenges that they had because they weren’t ready for that scale.

As you start to systemise and build your business, you’re constantly stepping closer and closer and closer to running a systemized business that enables you to scale. And then when the opportunity does happen, because you can’t always manufacture an opportunity, sometimes opportunities just happen.

So you want to constantly be moving your business closer to be able to handle bigger capacity and then you’ll actually find, you spot the opportunity and you’ve got space to chase it and you go, oh yeah, I’m going to now double down on that.

And that’s a big part of what a business owner should be doing. That’s part of the magic that they can bring, to be able to spot those opportunities and bring them in when they’re slightly outside of what’s front and centre. And yes, it was huge. As far as oh crap is concerned, they’ve gone on.

They sell an absolute truckload of dog poop bags. They work with the RSPCA, they’re the biggest in Australia of their particular type. Henry had said to me, we’re able to do what big companies can do even though they’re only a small company.

They’ve got a team of twelve and they’ve just got really solid systems and that makes them so much more efficient and scalable.

So again, this is that whole idea of what opportunities have you left on the table that you might not have even realised whether you haven’t been following up with the leads. Like there might be a truckload of work there, you just didn’t have a system for it. So you don’t actually know what it is that you’ve been missing out on.