How Could Process Management Transform Your Business? – A Case Study 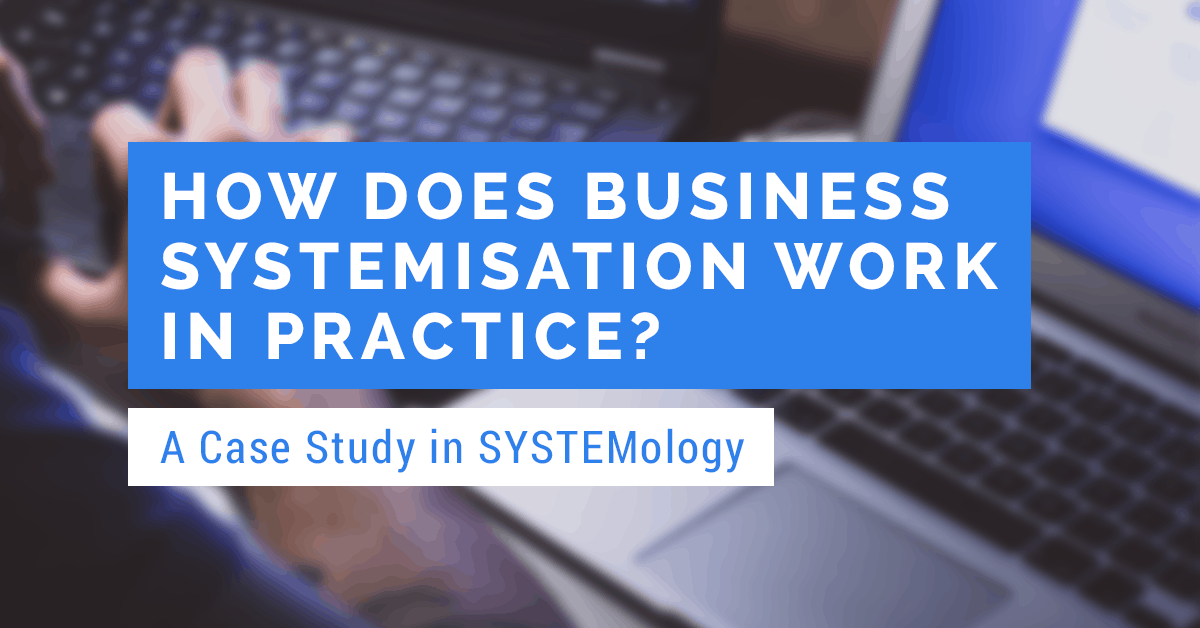 There comes a time when all business owners will need that little bit of extra support.  That goes for teams and individuals, too.  Business systems can not only help to ensure we’re all talking from the same page but can also help to drive productivity, morale and efficiency.  SYSTEMology® thrives on propelling this naturally.  But what could a business systemisation model bring to your own enterprise?

Reading up on process management and systems, in general, is all well and good.  It’s a different thing altogether, however, when it comes to actively applying ideas to your own working model.  SYSTEMology® and systemHUB™ may supply plenty of answers, but do you know what your questions are?  What’s the overall verdict when it comes from moving from a non-systems model to a fully compliant operation?

In this article, we aim to, basically, let someone else do the talking for us.  We’ve built up SYSTEMology® as a brand and as an asset to modern business comms.  However, we think it’s time you take someone else’s word for what we do.  We’re going to bypass the horse’s mouth completely, and take you deep into a case study to look at how our ethos and ideas could directly apply to your situation.

Jamie Lingham runs Absolute Immigration.  He’s one of many CEOs and business owners who have taken a chance on business systemisation and hasn’t ever looked back.  For the bulk of this article, we’ll be handing over to Jamie to give you the lowdown.

I wanted to just get one of our SYSTEMology® clients to tell you a little bit about this experience. I think getting the business owner out of the way is really really critical. So I had done a presentation to a little Mastermind group. There was a gentleman there, Jamie, who you’ll meet in a moment who heard it and said, I want you to do this for my business. My business is crying out for this, and then he said oh, by the way, I’m going to Chile for two weeks, but that’s okay Dana who’s also here as well, she’s going to be running this process. She is my systems’ champion.

Your DRRC and CCFs – Critical Thinking

So I’ve been working with Dana over the past couple months now where we worked through. We identified the Critical Client Flow™. We then worked through the DRRC, figured out who on the team is going to do what and then we finished up with our systems assign sheet.

Jamie if you want to maybe tell us a little bit about your business, where you up to and I know you’ve got a graphic which I’ll bring up, and you can put that into the appropriate spot.

Jamie: Thanks. Good morning everyone. I’ll just quickly give you a bit of a back story about where I am with my business. I’ve had the business for 17 years and about, maybe eight years ago, I did all what I thought was the standard, checklists and processes etcetera. Last year I had four of my agents who do the work, the migration agents, they worked with an assistant and that we called them pods.

That started my journey on just thinking, I’ve really got to start to get standard letters, and I’ve got to have things going the way I wanted. You deal with one of my agents, and they go away, the next conversation you have the communication will be exactly the same, and the way that my staff are trained is exactly the same.

It was about December when we had David come along and do a presentation, and Michael Coleman invited him along to a group that I’m in. I looked at David, and I thought, he’s really passionate about what he does, and I love immigration as well. I always say to people, it’s not the most sexy or exciting topic and I’ve got to say systems is probably even less exciting and sexy.

I always say to people, the way I look at immigration is, I always go back to an ad that I saw once, a print ad. It was everybody was watching the football; the stadium was packed. There was one person standing around looking at the light, The Light Tower and the caption underneath says we’re excited about energy, even if you’re not. I got that a bit from David as well. He just loves systems so much.

We said, okay, we’ll sign up to systemHUB™. We said we’ll do it on our own. It looks alright, systemHUB™ looks pretty easy. You’ve been here, done the presentation. Thanks very much. So I got Dana along and said Dana, can you be the champion? Dana said, there’s another girl in our office April. April, can you be the champion? Dana and  April were working on it. After about a month, two months I realised we couldn’t do this on our own. We’ve got no idea.  I love the concept, and I know how it should all work, but I don’t actually know how to implement it. We need someone to come and hold our hands.

We got David in, and as he said, it was just before I was going away. I said look, can you just start this? Obviously I’ve realised that I’m too involved still because I’m here today. I should have let Dana come on our own, but I’m actually passionate obviously about the business. I do know my business so well. I know exactly how I want it to look, and I’m genuinely interested in this subject.

If you asked me six months ago, 12 months ago, if I’d be getting excited about systems probably not, I just wanted to share that back-story and just say how good it’s been. Every morning when I come in I have headphones on and listen to some music. We’ve got all of our systems and processes in one part of the office, and I’ve got the whole process flow and every single communication going on.

I just spend an hour every morning going through editing what’s been done and saying, okay, is this right thing, is this good, no I need this language. I need it to be so I can put my final stamp because I know my business so well. I know exactly where we want to be. Just having that hour as I walk in the door, so saying good morning to everyone I just go to the back of the room and I have my headphones and music going. I just focus on just trying to get stuff done, and I think that works the best for me.

I think the option is to take a day out and do that. So at the start of the process, I remember I said look, we’ll get this done. It was the start of January. So I just want to have it done by the end of January.

David: You also said just before you went on holiday you said, I’ve got a new person starting in about three weeks. Can you have all the systems done so we can on board them and get them done?

Jamie: I don’t have a realistic time expectation. As Dave was saying before part of our business because we know the business so well, we’d sign up a client and say yes, we’ll do your Visa. No problems, you qualify. We can bring your partner from overseas or get your employee sponsored or whatever. Then we’d say, yes. Here’s the contract, pay the money and off we go. The client would say, now what? Then I’d say, now this. They’d go, now what?  It got to the point where I realised  we all know our jobs. You’re probably the same. You all know what you do so well, but your clients have no idea.

Translating Processes to Your Clients

We’ve got one of our clients called Decathlon, which is a new competitor to Rebel. It’s actually  a French-owned company. They’ve got a thousand stores around the world, and they’re coming into Australia.

I spoke to Olivier, and I had the initial meeting. He said I like the strategy you’re talking for our business, and I really like you. We want to work with you. They had another agent who didn’t give them any of that, and I said, oh, that’s great. We went through the path, and we started doing work for their staff members.

A few weeks later I went and visited him in Sydney, and I said, Oh Olivier, how’s it going? He said in his French accent, which I won’t even try and said, it’s not going so great. I said, what? He said well, your staff are fine, you’re great, we like you but we don’t know what’s going on. Nobody understands what’s happening. It’s quite confronting when the client tells you that, but it was fantastic as well. It’s the ego bruise, that little bit of pain but then okay, the appreciation. I said thank you so much for telling me. I’ll go and work on this.

Understanding how business systemisation works in practice is all about looking at the bigger picture.  SYSTEMology® is all about breaking that picture down piece by piece.  It’s about working out which areas of your workforce need stimulation, and how.  You could otherwise call it a deconstruction, of sorts.

Jamie’s story is like many which we’ve come across.  Translating process to clients isn’t always as simple as you think, or as you’d like it to be.  Therefore, both systemHUB™ and SYSTEMology® can help you find your method of translating and communicating what you do to others.

Process management and systemisation aren’t just beneficial for you, your team, or your end users.  It’s beneficial for each, and every party caught up along the way.  To this end, if you’re already considering re-evaluating your processes, it’s worth thinking about your clients.  Don’t get us wrong – you should always be thinking about your end users and your staff, too!

Systemisation’s goal is to break things down, chunk by chunk.  Before  .l, it may be difficult to see where things need to be changed, if at all.  Therefore, it is always worthwhile talking with those who have already reaped the benefits.

We love to share stories with you.  If you’ve already made changes to your systems management over the years, how did it work for you?  We’re just as much about sharing new ideas and concepts as we are about looking at how to make existing standards work to their full potential.