How to Create a Systems Driven Culture 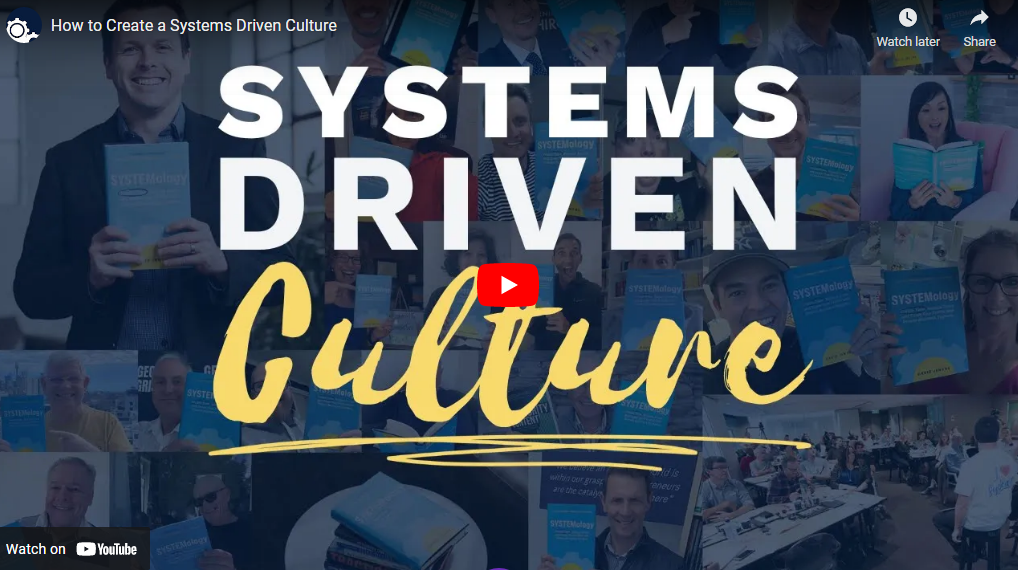 There’s nothing more frustrating than constantly repeating yourself.

A mistake gets made. You identify the worker at fault and coach them only to find they make the same mistake the next day, and the next, and the next…

Yet many business owners do exactly that. They get stuck repeatedly solving the same problems, and it’s an endless game of business whack-a-mole.

This is why you need a systems-driven culture.

When something goes wrong in your business, blame the system, not the person. Instead of pointing fingers at team members, your first step should be to look at the system, figure out what went wrong and find the solution.

Identify problems at a systems level and you’ll find the root cause. Solve it as a system and you solve it forever..

Watch this short video as David Jenyns explains how applying systems thinking habits will lead to a systems driven culture.

0:08 – The excusitis that stops businesses from systemising
0:51 – The solution of building systems thinking habits
1:28 – Why you must systemise
1:58 – How to build in systems thinking habits
2:43 – How to keep systems as a priority
3:33 – Solve the problem once, solve it forever
4:00 – Business is about solving problems
4:59 – Build accountability and transparency into your business
5:08 – Never ending improvement of systems

When we think about systems culture, oftentimes there’s a lot of baggage that people carry around, business owners in particular. I don’t have time, I don’t have money, I’ll do it later. They keep on putting off systemization.

Everybody has them and excuses and reasons why not to do something pop up all the time. And excuses end up being this baggage that really affects your motivation. And we need to think about intensity before and consistency, because really what you’re looking for is consistency. If you just rely on your motivation, your motivation will go up and down until you give up.

To build a system’s culture, what we need to do is build habits into the business. Because if you’re relying on your motivation it’s up and down. And at some point you’ll give up because you get all frustrated. Because resistance happens, you come up with all of these excuses and then stop.

You take the action that deep down you know you need to take. That’s why you’re reading this, because you know systems are at the foundation of all profitable businesses. There’s no way around it. At some point in time you’re going to have to put systems in place.

So if you want to build a business that works without you, if you want to scale, if you want to weather any storm and get through any market conditions, you have to put systems in place. There’s no two ways about it so quit putting it off and start taking action.

And think about how we move from motivation to making this a habit and this just becomes the way that we do things here. Part of it is you start with perfection, or rather you start with repetition, not perfection. That’s a biggie, we just want to make sure something happens.

You’re not going to do it perfectly the first time. You’re going to make mistakes. That’s part of the process. So you need to get into the rhythm of making this repetitive and keeping it front and centre and giving systems the constant attention that they deserve as one of the most, if not the most important asset inside your business. And this comes down to the idea of building in habits.

What habits could you build inside your business to make sure that systems get the attention they need? I’ll give you some ideas. Firstly, you need to make some time for systems. Put it on your calendar, add it as an agenda item for your meetings to make sure it comes up on a regular basis.

Build this habit of when something goes wrong in your business, it’s always the system’s fault first. Don’t point the finger at team members and say, why didn’t you do this. You did this wrong. You missed that step. This is broken because of you. The first default step should be let’s look at the system and did you follow the system?

If an issue happens and they followed the system, well, great. Let’s tweak the system and then make sure that that doesn’t happen again. Then we start to rather than playing Whack a mole in business, we solve problems at the root cause. At the systems level, we solve it once and then we solve it forever. That’s what systems are about.

If you think that and let me burst your bubble here, if you think that you’re going to reach a point where you never have any challenges in your business, let me just assure you that you’ll never reach that point. Business is about solving problems. But you need to, as a business owner, solve higher quality problems. You keep on levelling up at every stage in business. There’s just new challenges to overcome.

What drains your entrepreneurial life force? The quickest is if you’re solving the same problems and then you lose that drive as a business owner because it becomes frustrating because you’re having to repeat yourself and tell the team that they have to do this and hey, I told you how to do that last time. Make it the system’s fault. First. Find a system solution.

And take on this mindset of tony Robbins talks about this idea of can I constant and never ending improvement of systems. This is not a one and done scenario. When you build culture, this is the way that we do things. Here is what we’re trying to get to.

This is not, hey, I’ve systemized for three months and then I’m done. But it will get easier. You have to get over the hump first. You do have to remind staff. You do have to keep it front and centre. But then there will become a point where you’ve recruited people and onboarded people and you’ve trained people. This is how we do things here. And then it gets easier.