How To Systemise A Coaching / Consulting Business 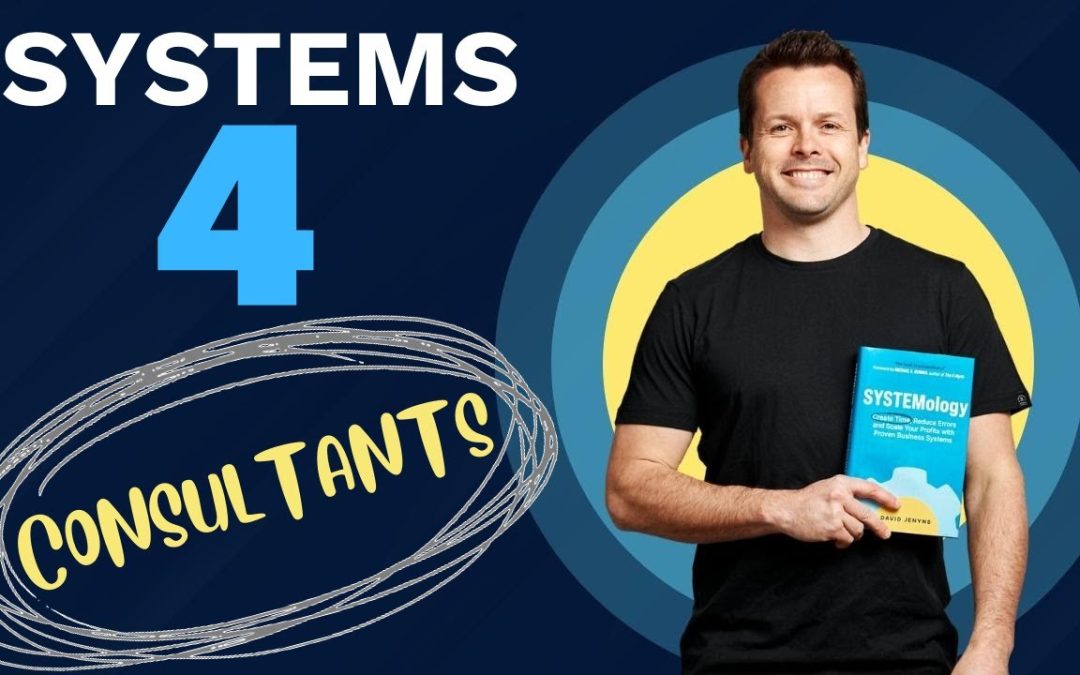 Den Lennie doesn’t think so. And he should know, because Den is a coach to filmmakers and specialises in systemising videography businesses.

He started by applying SYSTEMology to his own business and recording systems. Then he hired a VA, gave her a copy of SYSTEMology, and let her decide what she could and couldn’t do.

Over the next 18 months many of his tasks were handed over to the VA, Den’s revenue went up 85%, and his hours halved from 6 to 3 days per week. Through SYSTEMology, He no longer had to do tasks around the production of his podcast, things like:

Leaving Den to focus on essential tasks like lead gen, sales calls, and setting up projects.

Watch this video to learn how creativity specialist Den Lennie helps other videographers save time by applying SYSTEMology.

00:20 – Specialising in creative videography niche
00:49 – Discovering SYSTEMology and meeting Dave
1:05 – Tailoring SYSTEMology to the consultants space
1:35 – Applying SYSTEMology to his own business
2:17 – Outsourcing systems to a virtual assistant
3:20 – Creating a best practice database
4:05 – Clarifying and capitalising on target audience
4:50 – Revenue shift of 85% growth in 18 months
5:27 – Becoming a SYSTEMologist
5:50 – Recurring revenue stream through SYSTEMology

Now, he started off as a solo coach and he came across SYSTEMology, read the book, fell in love with it, and decided that he wanted to implement it in his own business. He reached out and we connected and we talked about how to tailor what I talked about in SYSTEMology book to the consulting coaching space because it’s a little bit different for coaches and consultants because you don’t have a team around you.

So to start, he went through and he mapped the linear journey that the prospect and the client goes through to deliver his core product or service, which was basically his coaching inside his video business. So he started off there, then he started to screen record all of those steps. Just a little loom video. I don’t know if you’re familiar with Loom or Zoom or there’s lots of different ways you can screen record, but when he made a video to walk through the critical client flow, but then he went through each of the different steps and he made little videos on, oh, here’s the key marketing strategies that I use.

Here’s how I handle an incoming lead. Here’s how I sell to that person, here’s how I onboard them. And basically made a series of videos. He just recorded them over the course of about six months. Then he ended up hiring a VA. He hired a girl called Milka. She’s based in the Philippines. And he gave her a copy of the SYSTEMology book and said, I want to do this in my business. And I’ve recorded all of these videos for you.

Perhaps you can start Milk by watching the videos and doing the documentation. So Milk watched these little videos that Dennis had put together. She made little documents like this. And you can see one on the screen here. This is editing videos by removing unwanted parts using shortcuts. Anyway, she basically documented videos like these. And what he found was that when Milka did that, milk learned how to do all of these aspects inside the business, like some things she could do and some things that she couldn’t.

So she might say, oh yeah, I could do those LinkedIn connections. Yeah, I can edit that podcast and I can upload that to your website. Oh look, I don’t know how to run the coaching calls, you’re going to have to do those. But just going through this process, milk learned how Den’s business worked and Den built up this best practice collection of systems and processes for the way that he ran his consulting business.

And over the course of 18 months, he noticed phenomenal changes in his business. Firstly, one of his primary marketing methods was his podcast and he basically systemized the production of it, the booking of guests, the production notes, the sharing it on the website, the distribution, and we’ll talk a little bit about this idea of authority content.

At the end of this webinar, I’ve got another little thing I wanted to circle back around to, but then was able to double the output for his podcast and he was able to connect with twice as many people on LinkedIn. So he got very clear on his target audience because he specialised and picked his niche. Milk went out and started connecting with all the videographers.

He started posting more consistently on his social media content that was very specific to this target audience. And Milker was doing a lot of that back in admin because really the magic then brought was when he interviewed people for his podcast. But that was about it. I mean he’s not doing anything special to share it on social media anyway.

He stopped doing a lot of the admin tasks which really got him to focus on only the things that he could do, which were basically creating content sales calls and working with clients. So he was able to move from six days down to three days and his revenue jumped up by 85% within twelve months and he’s been growing month on month and he was already doing six figures.

So he was able to skyrocket this business by basically rolling together a lot of what we’ve been talking about today and then leveraging the systems for himself.

Now I told Den that I was going to be chatting with you guys today, sent me over a couple of photos. He said I could include them in his presentation because he said you can tell everybody this is what I’m doing with my free time these days. But Denn’s story didn’t stop there. Ben decided to become a SYSTEMologist.

He now creates systems for his video coaching client businesses. He shares the best practice systems that he has developed and he basically has developed systems around legion, sales calls, setting up a project. It’s all part of what he offers now. It’s this best practice where he’s developed the systems once, but he continues to sell it to every single coaching client that comes on board, and it’s added in a tremendous revenue stream through to his business.