Building Your First Business Systems – Where Do You Start? 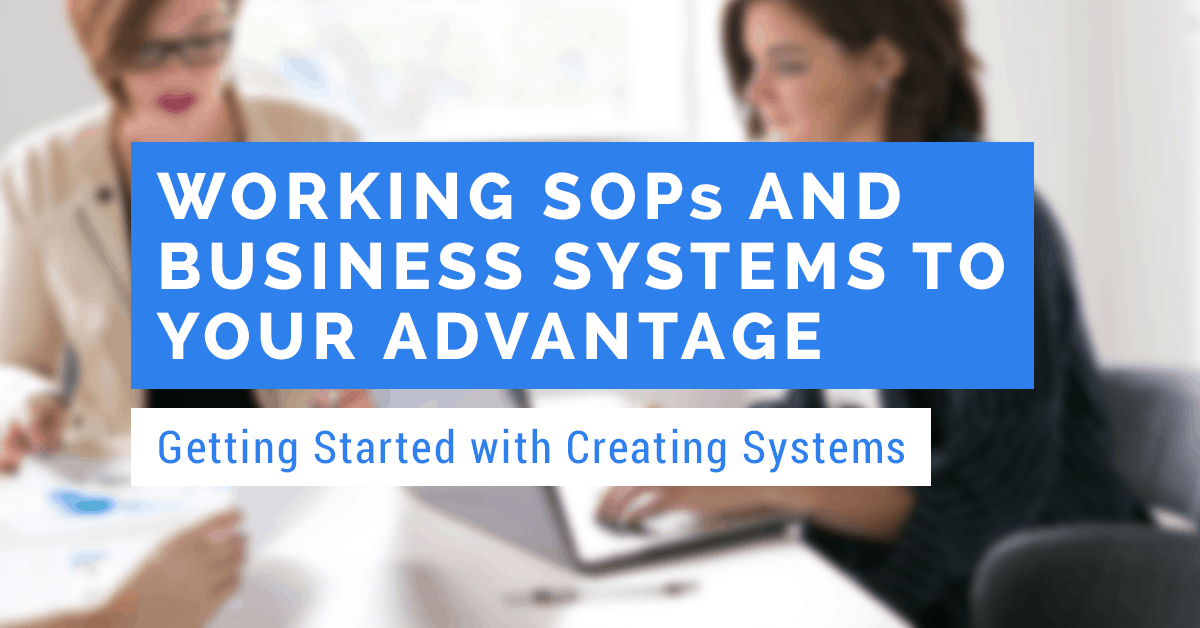 So, you’re eager to go ahead and to start getting into creating business system plans for your team.  That’s great – but where and how on earth do you get started?  Which details do you need to map out first?  Who’s responsible for putting together business how to documents in the first place?

If things already seem as clear as treacle, don’t worry.  SYSTEMology® is all about simplifying complicated setups and strategies to help ensure everyone is on the same page.  Building SOPs your team can rely upon for project after project is all about thinking clearly about the bigger picture.  Sometimes, it can take a few deep breaths and some meditative thinking!  In any case, systemHUB™ and SYSTEMology®’s wide array of supports are here to help you.

In this article, we are going to look closely at what to expect from setting up business systems for the first time.  Systems and SOPs are dependent upon having some sort of pecking order in place.  A kind of map of the people involved in your projects, and invested in your team.  This is where the concept of a DRRC, or Department Responsibilities and Roles Chart, comes in handy.

We’ll look at DRRC in a little more detail as we go along.  Ultimately, we’re here to look at how to really kick-start your systems in the simplest and most streamlined way possible.  Everyone has to start somewhere!  SYSTEMology® will make sure you’re up to speed each step of the way.

So the second step here is that the two tools we’ll look at are the department responsibilities roles chart and the systems assigned sheet. So the Department Responsibilities and Roles. I’m just going to call it the DRRC.

This is not an org chart; I’m not looking to create an org chart. If you’ve already got an org chart in place, fantastic, that’ll move you along. The purpose of this is to identify in your team who is going to be doing those important steps.

The first thing that you have to do as part of your DRRC is think about what are the departments within your business. There is no right and wrong; this will cover most businesses: sales and marketing operations and finance, HR and management. They are the core systems, sub-systems that make businesses function. There are systems underneath those.

You might say, no I don’t like the way that that is set up. Maybe I want to break out finance and finance goes on its own. Maybe you’ve got an extra one where you think: Hey, I need an administration department. There’s no right or wrong. This can change over time. The key is if you’re smaller, fewer departments is better. As you get a bit larger, you start to break those departments up. So we just need to think about what they are. It’s a three-step simple process; a simple system will take you through the department’s responsibilities and roles chart. The whole purpose of this is to find out who in your team has the knowledge that we’re looking to extract from that process.

The final step, we just have to one, you need to identify department heads. So a department head, it’s okay to have one name appear in different departments. That’s okay. So you’ll see here Melissa, Operations, HR. You just never want to have two names in the same box. You need one person who takes responsibility for a department. You don’t share that role.

Underneath that, you can then start to allocate out your team because team members will then fit underneath those different departments. Often times at least in our business, the operations team is by far the largest. Rather than listing out all of the names I put who is the lead of the certain area and then the plus 1.  The lead is probably going to be the person who ends up doing the documentation for that particular thing.

If you are in those roles, that’s okay. I mean we’ll optimise later, for now, put it in. Maybe it’ll be a bit eye-opening, and you think wow, I am across everything. Do it as it is and we can improve it as we go. Oftentimes, this is when the micro business goes, wow, I am the business. I mean every department and you are where you are. You just start where you are, but the sooner we can start to delegate that responsibility the better.

Melissa’s helped me a lot with that where we say, okay, Sally is Finance. Sally looks after that. She gets to call the shots there, and she takes ownership of that, and she’s driving the systems. Yes, we try and help and we suggest things and I’ll come in and make a mess. Then between Melissa and Sally, they help me get back on track and clean it up. So we just need to now think about your business. If you’re not sure of the Departments, then you can just copy mine.

So the final step in this process, you start to think of your business in terms of departments. Don’t get too caught up on the Departments; they can change over time. You can split them. You can shrink them. There are no hard and fast rules.

It’s just having something because the whole purpose here is to identify who, not the business owner, has the knowledge that that can be extracted and then we use the SAS the systems assign sheet. Really all it is is then transferring that data into a sheet, and this is for Melbourne SEO Services. We just want to identify what needs to be done, who has that knowledge that we can extract it. Sometimes you might even put when it’s going to be done.

So the columns. The department you’re just going to transfer that over from the departments that you’ve already done. The system name, that’s just what you identified in the Critical Client Flow™. There also, the responsibilities that you just assigned in Step number two, then the description you might expand out a little bit further.

For marketing, we’ve got SEO. I want to write some systems around how to write an optimiser blog post or maybe for the proposal, how to prepare a proposal and send it to the client with the email templates. You just write a little bit more detail just so you get down what that step includes and then who the owner is. The owners often times will be the department head. Oftentimes, it’ll be the team member who does it all the time. There is a chance that your name if you’re the business owner, will appear on some of these and that’s okay. I’ll give you a way to make this easy because a lot of people don’t like the documentation; there is an easy way to extract it.

But the key is to identify who has the knowledge and wherever you can, try and get your name out of that particular square. If you’ve got any resources, it’s good to note it as well. You know, if we’re talking, for SEM, I want to create some systems around how to run a Facebook advertisement. We bought a course on how to run Facebook ads so that could then help the person who ends up developing it.

A couple of things to think about, oftentimes in your business: I like to always have redundancy. You’ll think there’s a primary owner and you’ll hear me reference also a secondary owner. The primary owner is the person who owns the system. They’re usually the person who has the knowledge, not necessarily the person who does the documentation, but they are the owner of it. You’ll often have a secondary person who you’ll learn about a little bit later who is always like the second backup.

If the primary owner goes away on holidays and needs some time off, rather than that function or that thing not getting done, you always want to have a second person who can step in and do something. That way the business continues to operate whether or not your team is all there. Melissa will help and give you some ideas on how to show the team that it’s actually beneficial for them to do it.

So they’re the four steps for this assign phase. We just need to identify the departments, assign those responsibilities, assign the roles and then assign the systems related to that, using the assigned systems sheet. I’ve shown you obviously a little bit of how ours look like. I just want to see if anyone had any questions with regards to that.

I jumped around and answered a few and tried to answer those in that little bit that I just gave you there. But did anyone else have any questions?

Stewart: So at the risk of asking a silly question. So the owner in this in this sheet is the team member or the head?

David: Yes, so the owner is the person with the knowledge. Generally speaking, it can be the head, but it can be team members as well. There might be, for example, I think of operations. In our operations example, you’ll notice there are a lot of operations.

Melissa is the head of operations. Melissa doesn’t really know SEO. I mean, she knows the broad concepts but she doesn’t do the keyword research, and she’s not writing the title tags and descriptions. MJ would probably be more relevant to do a system around keyword research. July or someone might be better off for writing the title tags and descriptions. So it really is whoever has the knowledge.

You don’t have to get too caught up. The department head will still be the one who reviews it. Oftentimes, if the department head isn’t the primary owner, they will be the secondary owner just so they understand it and they’ve got good visibility over all of their department.

It’s easier than it may seem to break down your departments and the various responsibilities therein.  However, when it comes to creating a business system for the first time, you need to take time out to look for clarity.  How easily does your team strategy break down?  Who does what, and how does that impact the bigger whole?

Organisation charts are fantastic.  However, a fully-functional DRRC can really help to start putting new systems in order.  Systems and SOPs are reliant upon this clarity in organisation.  You can’t expect to leave systems and instructions to their own devices without having setup some of the parameters in the first place.

With this all bared in mind, it’s worth considering taking system building on a step-by-step basis.  It shouldn’t ever be rushed.  The SYSTEMology® ethos centres on this concept of simplification.  Simplification and speed don’t always go hand in hand in the planning stages.  You’re going to need to start creating business systems by taking things right back to basics.

Look at your firm or team skeleton.  Consider the roles you have to play, the experience you will have with you, and the end results you are aiming to achieve.  When you have this information on paper, only then can you start to set up truly reliable systems.

Let SYSTEMology® and systemHUB™ help lead the way for you.  Have you had any experience with DRRCs in the past?  How have they worked for you?  Come and connect with us.